For humans, olfaction has significantly lost its bio-semiotic role. In our project we are going to amplify and expand the vocabulary of this signal system by developing DIY-approaches for modifying human skin microbiome in order to produce smells which can be easily detected to self-diagnose or prevent diseases.

The ability to smell and to identify smells can be seen in a context of bio-semiotics: as a chemical signaling systems that enable to communicate within and between of different species including plants, bacteria, protozoan, insects and animals. The role of this signal system was underestimated for a human being, hence this system became a dead language. In our project we propose to resurrect this language: to release the potential of this signal system by using noninvasive technology of human skin microbiome gene modifications in order to create bacteria producing detectable odors as a response to particular triggers\conditions such as fever, infectious process or disease.

For instance we can make bacteria which start to smell as a jasmine when person has a cancer or smell as a rose when person has some infection. Therefore, the smell of human microbiome becomes an easy system of diagnostics.
We can also change an odor of skin microbiome to make it unrecognizable or repellent for mosquitoes to protect people living in areas endemic for yellow fever, dengue and malaria.

After the research phase of the project we are going to produce DIY-bio-reactors with gene modified skin microbiome bacteria. As an important outcome of the project we will also develop DIY-kits for experiments with skin flora and conduct workshops which will allow participants to try out our methods with their own skin microbiome as a way to create a platform for DIY experiments in the field of open medicine. 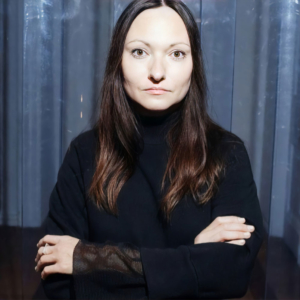 Helena Nikonole is a new media artist, independent curator and educator whose field of interests embraces hybrid art, the new aesthetics, the Internet of Things, and Artificial Intelligence. In her works she explores technology’s potential opportunities, risks and dangers that techno-evangelists and scientists are unable or unlikely to realise.

As a curator, she focuses on critical approaches to technology. This includes the exhibition “Learning Machines” which she co-curated together with artist and curator Alexey Shulgin, as well as a project “Datasets VS Mindsets: Post-Soviet Explorations of the Digital Control Society” (co-curated together with Olga Vad) at Ars Electronica Festival 2020. 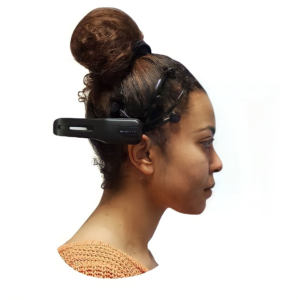 Lucy Ojomoko is a molecular biologist and artist. She is focusing her science and artistic research in the field of synthetic and neurobiology: exploring the problem of trans-species and intraspecific communication, and studying plasticity limits of living systems for reprogramming.

Was selected for participation in the 13th Young Scientists Forum 2013, FEBS Congress 2013(Saint-Petersburg, Russia), FEBS Congress 2014( Paris, France), and SENSE6 2013 Conference (Cambridge, UK), Perspective in Molecular Neuroscience in Health and Disease, 2014 (Bochum, Germany), Basel Life Conference 2017, 2018 (Basel, Switzerland), and many others. A finalist of Singularity University and Skolkovo competition with synthetic biology project (creation of a handy-tool software for SynBio). Her scientific project was presented at a competition organized by MIT and Global Innovation Labs, Boston, USA. Awarded in a range of grant programs, including DAAD, “S.T.A.R.T.”, “Umnik”. Author of scientific papers and patents.

As an artist and member of science-art group 18 apples she was exposed to a range of exhibitions and festivals include “MetabolA.I” at Ars Electronica 2017, “Ural Industrial Biennale of Contemporary Art” 2017, “Sub observationem” 2015, “Polytech” Science festival”, 2015, “Medianovation. Science-art Experiment No1/2014” 2014, “Geek Picnic”, 2014, “Manifesta-10”, 2014, and many others.
https://www.researchgate.net/profile/Lucy_Ojomoko

Kersnikova Institute is a non-profit and non-governmental cultural organisation, which serves as an institutional frame for three progressive venues: Kapelica Gallery, RAMPA hacker space, and BioTehna laboratory.
Kapelica Gallery is one of the leading venues for contemporary investigative arts worldwide. With a programme which consists of spatial installations, performances, sound research and theoretically – reflective lectures, Kapelica Gallery challenges scientific and technological applications, biopolitics and urban phenomena, addressing both professional and general public. The Gallery programme is developed as a response to the profound changes in society, thus it is constructed from art activities that reflect the multitudes of contemporaneity and announce the possible future scenarios.
BioTehna laboratory is a place where we spur curiosity, perform experiments and investigate fascinating correlations between nature and technology. The wet lab where the artistic investigation of living systems takes place has been upgraded with the Vivarium (2017), where we explore the co-dependency between animals, plants and robots. In BioTehna artists and scientists creatively and innovatively merge living systems with electronic technologies and their results encourage thoughts and awareness of the digitalised life, which awaits us in near future.
Rampa is a laboratory for hacking science, art and society with programmes that develop the potentials within the youth. The experimental environment is aimed at individuals and groups that are interested in the creative research of new and obsolete technologies. Rampa serves as a platform for the incubation and production of art projects by young creatives and hosts the activities of various communities that endorse and support gender equality.
More than 25 years of daily activities have resulted in hundreds of unforgettable moments and experiences, which have given the contemporaneity form and meaning. Kersnikova Institute is, due to its strong programme focus, marked on the maps of the most interesting international centres dealing with contemporary investigative arts, science and cutting-edge technologies.

BioTehna laboratory is a place where we spur curiosity, perform experiments and investigate fascinating correlations between nature and technology. The wet-lab where the artistic research of living systems takes place has been upgraded with the Vivarium (2017), where we explore the co-dependency between animals, plants and robots. In BioTehna artists and scientists creatively and innovatively merge living systems with electronic technologies and their results encourage thoughts and awareness of the digitalised life, which awaits us in the near future. Exhibitions, workshops and lectures that are organized within the frame of BioTehna are merely an excuse to include everybody interested in an active do-it-yourself experience, which includes hacking various living systems, connecting living materials and robots, learning from the extreme world of plants and animals, etc.

The BioTehna laboratory is exceptionally well equipped wetlab with advanced microscopy equipment, professional incubators, clean chambers, sterilizing equipment, centrifuges, PCR machines … and other equipment and materials for facilitating various biotechnological research and project development. Since its establishment, it served as a research and production platform for many successful and internationally acclaimed contemporary investigative art projects in the field of hybrid art. 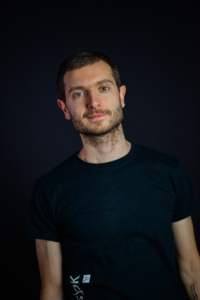 Kristijan Tkalec (M) is a biotechnologist and is the coordinator and project manager at BioTehna Laboratory since 2013. He facilitated and conducted a wide range of projects, actions and experiments, mostly in the field of DIYbio, biotechnology, biology, biochemistry, with acknowledged and renowned artists, such as: Brendan Balengee, Špela Petrič, Maja Smrekar, Mojca Založnik, Zoran Srdić, Angelo Vermeulen, Anna Dumitriu … and has collaborated with DIYbio initiatives and communities such as Lab Easy, Hack-a-taq, Hackteria, Gaudilabs etc.. In the past years he co-conceptualised, implemented and led educational programmes for children and youngsters at Kersnikova Institute (Friday Academy, Summer Academy, Open Lab, Crafty Builders, … and has co-developed a series of workshops for educators and teachers in collaboration with the National Institute of Education.

In the framework of the ART4MED Quorum Sensing: Skin Flora Signal System project, the Mycosmo IC as associated partner, provided infrastructure, materials and expert assistance to artists and primary research partner (BioTehna Laboratory) in order to enable work with genetically modified organisms in a suitable environment.