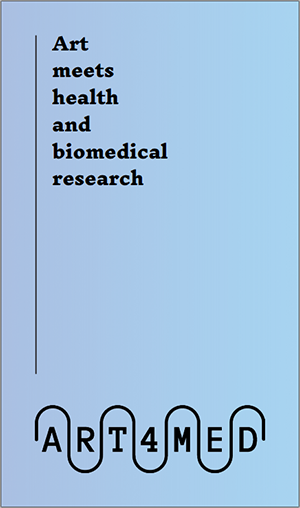 This booklet presents the ART4MED residencies and projects.

The ART4MED project has as its stated and admirable aim to foster encounters between arts practices and health and biomedical research. Such encounters have long and complex histories of their own, but they seem to hold a particular urgency and vitality today. The past pandemic years seems to have, if nothing else, put a stamp on the 19th century German physician and key driver of cell theory Rudolph Virchow’s statement that ”medicine is a social science, and politics nothing but medicine at a larger scale”. Beyond the pandemic, this entwinement of medical science and social, cultural and political worlds is even further echoed in the broader public health landscapes of post-industrial societies in which the majority of disease states and health problems are characterized by being complex, multi-factorial, lifestyle-related and environmental embedded, rather than single-origin, biologically specific and causally identifiable entities. Distinct knowledge regimes and clear-cut disciplinary practices are coming up short as a response to these messy situations; we are clearly in situations in which it is “’discipline’ that need explanation, not promiscuity,” as Dez Fitzgerald and Felicity Callard writes in a study of experimental encounters between social science and neuroscience (Fitzgerald and Callard 2014, p. 23). They ask how human scientists – and we might add artists and medical scientists to this list – are to produce knowledge “amid a growing realization that those boundaries are pasted across objects which are quite indifferent to a bureaucratic division between disciplines; and that scholars and researchers of all stripes invariably attend to, and live among, objects whose emergence, growth, development, action, and disappearance do not at all admit of neat cuts between the biological and the social, or between the cerebral and the cultural” (Fitzgerald and Callard 2014, p. 23). Creating lively encounters between arts practices and health and biomedical research as ART4MED has done is thus, amongst many other things, a genuine and important way to grapple and stay with the contemporary problems of health and illness. The projects in ART- 4MED are rich and polysemous, open to many forms of analysis. They partake in a steadily growing movement aimed at producing the forms of knowledge suggested by Fitzgerald and Callard. Rather than forcing them into a single paradigm or frame, I would like to use this foreword to suggest two functions or perhaps sensibilities that seemed to me to resonate within the projects. They are two amongst many, and could be described otherwise, using other words, terms or inflections; they were just what appeared to me.

In a 2021 roundtable talk on Medical Imaging and the Contemporary Clinical Encounter, artist and Reader in Technological Embodiment and Creative Practice at Edinburgh College of Art, Beverly Hood, pointed to an important potential of encounters between art and medical science: That of an ‘early warning system’. While such encounters cannot and should not be reduced to this single function, there seems to me to be something particularly timely and rich in this idea for our current moment, a moment in which we are seeing both an unprecedented expansion of and struggles over medical sciences and practices. Put more directly, the need for such warning systems stems from the massive expansion of medical thought and practice. As medical sociologists have argued since the 1970s, our Western societies (and indeed increasingly with global reach) have become medicalized. In the introduction to his evocatively titled book Is Medicine Still Good for Us? A Primer for the 21st Century, the medical ethicist Julian Sheather notes the unparalleled reach and success of Western medicine and medical science. From antibiotics to vaccinations, heart surgery, genetic therapies and much, much more, medicine has invaded every aspect of both our individual lives and the societies we inhabit, shaping ideas and experiences of health, illness and mortality; much of human existence from the womb to our death beds have become domains for medical thought and intervention. It is within this landscape that the idea of encounters between art and medicine serving as early warning systems might hold purchase; as a meaningful and important way to probe at the cracks and fault lines in the entangled spaces of bodies, technologies, knowledges, experiences, imaginations and practices that make up the modern medical complex. Which bodies are made visible and invisible? Which experiences are counted and which are denied relevance? Encounters between art and medicine can help register where this complex is developing such gravitational force as to shape both patients and practitioners, institutions and knowledge systems, in ways that might not only stifle but actively damage the health and wellbeing of the multitude of people within its sphere of influence. One of the classical examples of early warning systems are the canaries that mineworkers would bring with them into the coal mines as a way to detect toxic levels of carbon monoxide; once the birds starting passing out, it was time to leave before the miners were next. Artists are not canaries instrumentally exploited to preserve an extractionist system; nonetheless, there is something about the scene that holds sway: Venturing together into unknown terrain, detecting toxic forces that can remain below levels of detection until their damaging effects occur. What art might be said to offer medicine (the 4 in ART4MED), then, is a critique of and a drawing out of the possible dangers and toxicities hiding in its practices, institutions and knowledge paradigms. We see this clearly in the work of Edna Bonhomme, Luiza Prado de O. Martins and Nazila Ghavami Kivi in the m/other project with LABAE, in which questions of pain, motherhood, exclusions and obfuscations within disciplinary frameworks are brought to the surface, and new practices of care and tenderness are enacted in the face of such structural violence. The work of Adriana Knouf with the Waag Futurelab similarly examines notions of the commensal in order to probe at what is both in- and excluded.

Alongside the mode of warning system, the encounters staged in the ART4Med projects also holds firmly on to another value: That of making something new together. Here, the 4 takes the form of an invitation, an opening into a new, different space created from the encounter. Interactions between art and science have traditionally been seen as important because of the need to counter a certain reductionism built into scientific medicine – art as a way to insert a wider set of perspectives on the human experience into a biological and disease-oriented framework. How to care better, how to view disease in a more existential framework. What does illness mean? What does it mean to be well? Modern medicine is powerful in its attempt to move between observation of patterns, hypothesis testing and theory (or model) development regarding the causes and potential treatments for disease. However, disease and healing are not just technical problems to be solved, they pose pragmatic and moral challenges for individuals and societies and they form imaginary landscapes that shape dreams, ideas and futures. They make worlds. And because they make worlds, they must be explored imaginatively, experimentally and critically. Both to inform of the shape of the terrain and to bring back warnings of the dangers they hold. Encounters between artists and medical science and scientists can make up such exploration teams, as they make expeditions into the tangle. The Mnemonia project examinations across biomedicine and reindeer herding practices is a wonderful example of such collaborative world-making, as is the work of artists Helena Nikonole and Lucy Ojomoko with the Kersnikova Institute on quorum sensing. The UNBORN0X9 residency likewise marks a very literal attempt to utilize both artistic and scientific knowledge practices to create new things together. These ART4MED projects and this volume thus document and represent a series of such valuable and vital examinations of medical worlds and worldmakings. While differing in methodology and aims, the five projects seem to me to share the sensibility of both the early warning system and the imaginative guide to new embodied worlds. You might prefer other tools with which to grapple with them; that is part of their richness and the ways in which they genuinely respond to the complexity of the situations and topics they engage with. ART4MED, then, presents richlytextured ways of understanding medicine as a practice and a science, and understanding health, illness and medical care in relation to individual subjective experience. Ultimately, it partakes in an ongoing effort to reimagine and reconsider the ways in which both artistic and medical knowledge might contribute to human flourishing.

Fitzgerald, Des & Callard, Felicity. (2015). ”Social Science and Neuosciencebeyind Interdisciplinarity: Experimental Entanglements”, in: Theory, Culture and Society Sheather, Julian. (2019)
Is Medicine Still good for Us?: A Primer for the 21st Century. Thames and Hudson

ART4MED is led by ART2M (FR) with Bioart Society (FI), Kersnikova Institute (SI), Laboratory for Aesthetics and Ecology (DK), Waag FutureLab (NL)
Production by Anne-Cécile Worms, coordination by Ewen Chardronnet (ART2M)
ART4MED is co-funded by the Creative Europe programme of the European Union
The European Commission’s support for the production of this publication does not constitute an endorsement of the contents, which reflect the views only of the authors, and the Commission cannot be held responsible for any use which may be made of the information contained therein.